The Namib Desert is what is called a cool coastal desert. It is approximately 2000km long and stretches from the Oliphant’s River in South Africa all the way through Namibia and up to the San Nicolau River in Angola, averaging around 200km wide. The desert is formed mainly due to the cold Benguella current that flows up out of the Arctic, along the Namibian coastline and out into the Atlantic Ocean. The age of the Namib Desert is a bit of a question but most are in agreement that it is +-60 million years old. That does not mean that back then it looked like it does now but it was an arid to semi-arid region. Unlike many other deserts, the Namib Desert has a linear oasis, meaning that the mountains in the east form a catchment area and the water flows down water courses to the coast.

The Namib Desert has 2 perennial rivers in the Orange and Kunene rivers. The others – Tsauchab, Tamas, Kuiseb, Swakop, Omaruru, Ugab and Hoanab rivers – flow during the rainy season but do have sub-terrainian water flowing. Some years they may only flow for a few km’s, some years to the Atlantic and some years not at all. Most of the Namib Desert is made up of gravel plains. This does not mean that nothing lives there – quite the contrary! There are many lichen fields (the combination of a fungus and an algae), welwitchias (endemic to the Namib Desert and Namibia’s national plant), insects, beatles and desert adapted animals.

However, most visitors will visit the more accessible dune belt around Sossusvlei. We offer tours to Sossuvlei, a Safari tour and a Shuttle tour. The dunes in this region have been formed mostly by gravel and sand being deposited into the Orange River in the interior of the continent and taken westwards towards the ocean. This dirt is churned up by the Atlantic and taken north with the Benguella current. It then gets blown inland by the prevailing winds, forming the dune belt. The apricot coloured dunes are made up of a lot of iron oxides. This rusts with the moisture coming off the cold current overnight. This is also how all the desert adapted fauna and flora get a lot of their moisture. Localised rain and seasonal fruit (wild melons) help. 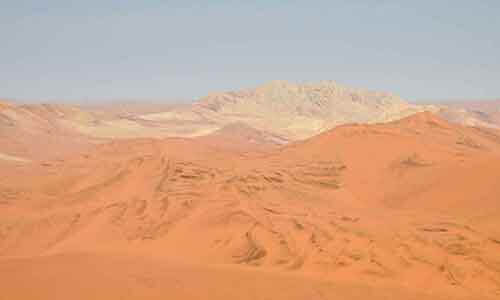 The name Sossusvlei is from the Nama word Sossus, which means ‘the end or ”where the water stops’. It is actually a pan where the river ends after being blocked by the dunes from reaching the ocean. Even though this is the name most people would associate with the area, the more spectacular pan is Deadvlei. It is about 2 km from Sossusvlei and the dead camel thorn trees are a photographer’s paradise.

Perhaps climb Dune 45 (and Big Daddy) and see the pan from the 325m vantage point. Run – or slide – down the side of the dune and walk the length of the pan. Take pictures amongst the 1000 year old dead camel thorn trees that were alive for around the same time. If you stay at the NWR camp site at Sesriem you will be able to get through the inner gate an hour before sunrise. The best place to watch the sunrise is from the top of Dune 45. Watch the dunes turn from black to deep red while letting your soul breathe.

Before you leave have a well deserved cold beer at the bar then visit the Sesriem canyon. A ‘riem’ is a length of cowhide and Ses means the number 6. It took 6 lengths of hide to get the water out the bottom.

Stroll through this cool canyon that averages 6m wide and 32 m deep. It is about 3km long and is formed by the Tsuchab River cutting through some softer sedimentary rock. As you walk in, turn left and walk to the end where there is some water in a heavy rainy season. Keep an eye out for the fish in the water and the horned adders in the shade of the canyon.

The best place to watch the sunset is from Elim Dune, 7 km from the Sesriem camp. If you are on a self -drive safari then a 4×4 will be needed to do the last 5km to Deadvlei. If you are in a 2×4 then this is the perfect opportunity to walk amongst the dunes, alongside ostriches, springbok and oryx. Please take a lot of water. What you need, x 2. There are no hot dog stands here! However, NWR offers shuttles in their 4×4’s for around N$150pp each way.

Let us take care of everything and join us on an unforgettable safari to the oldest desert in the world!