Imagine if you will, Southern Africa, filled with rivers, mountain ranges (Drakensberg), semi deserts (Karoo), deserts (Kalahari). The erosion that takes place deposits the sand, pebbles and rocks into the rivers flowing towards the West coast. Contact us to book Sossuvlei safari tours and experience this for yourself.

Have a look at the map below. The main river flowing towards the west is the Orange river. 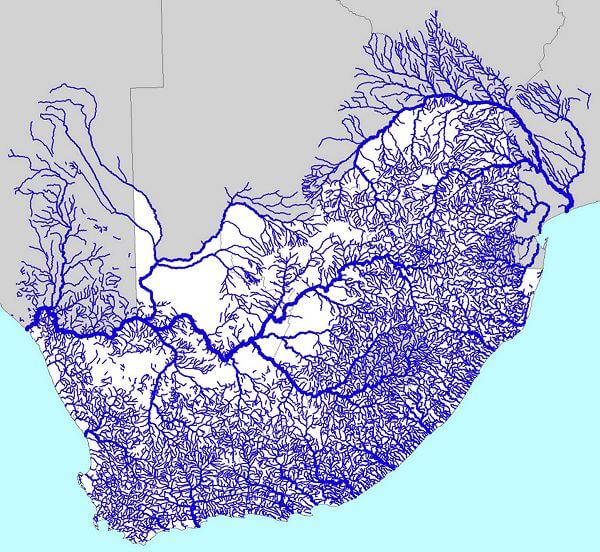 As you can see many if not all the rivers flow either into the Orange in South Africa or the Zambezi in the North. So, all the sand from the southern part gets deposited into the orange and gets taken westwards towards the Atlantic Ocean. Once it gets to the Atlantic it gets caught in the Benguela current heading North from Antarctica. The sand pebbles etc. get churned up and starts getting deposited onto the shoreline. The prevailing wind then blows this sand eastwards (inland) and forms the dune sea we know as the Namib Naukluft national park. Most people will know it as Sossusvlei. The Namib is mostly gravel plains but after these linear oases (rivers) along the Skeleton Coast there are always a few dunes (if not many). The Namib does not have Oasis in the way you might think. We don’t have water that bubbles to the surface as in the Sahara but linear oasis. In other words, we have rivers that flow from the high lying strip in the center of Namibia and flows towards the Atlantic in the west. The Namib desert is about 2000km long and on average 200km wide. It ranges from the Oliphants river in South Africa to the Carunjamba river in Angola. This stretch of coastline in called the Skeleton Coast. See the map below.

The dunes around Sossusvlei are mainly star dunes and have been in the area for around 50 million years. Some of the dunes have petrified bases. In other words, the sand is so heavy and has been around so long that they have turned to “rock “or petrified. They are made up of many minerals, but the deep reddish color is from the iron oxides in the sand that rusts and gives them that “rust” color. The deeper the red the older the dunes.

The cold Benguela current creates a fog of moisture that blows inland during the night and the water droplets that gather on stones, leaves and rocks are how the desert adapted animals get the water. However, once a year at most and perhaps as rarely as once a decade the Tsauchab river flows from its catchment area in the Naukluft mountains and flows towards the coast. A few million years ago this river used to flow to the ocean but after a dry period it was pushed back towards the east and the pan that is called Sossusvlei. Named by the Nama people it means “the place of no return or dead end”. 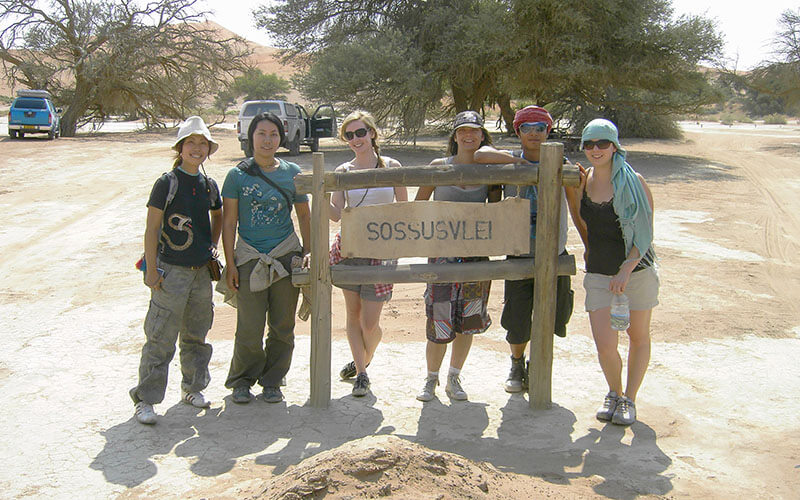 While the pan at Sossusvlei still gets water there is another pan that was cut off from the flooding and it basically died. This pan is called Deadvlei. There is still a very small amount of greenery but that is from localized rain. However, most of the pan is dead camel thorn trees that were alive for around 1000 years and then dead for around another 1000 years. The lack of moisture means lack of bacteria, so the trees don’t decompose as quick as say inland where there is more rain. There is some amazing flora that’s leaves curl up during the day to protect itself from the sun and opens at night to gather moisture. Also, the Nama melon that has no leaves, so it gives off as little moisture during the day and uses its stems to photosynthesize. The nama plant has this sweet melon that gives much needed nutrients to jackals and small rodents. 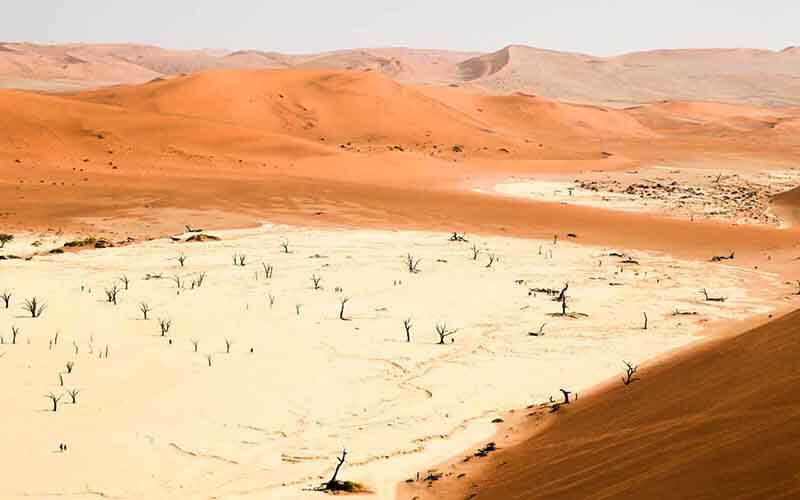 The area around Sossusvlei has some of the worlds highest dunes with the average being over 200m and the affectionately known “big daddy” that is 320m above sea level. A wonderful thing to do is to watch the sunrise from the top of dune 45 and the unset from the top of Elim dune. 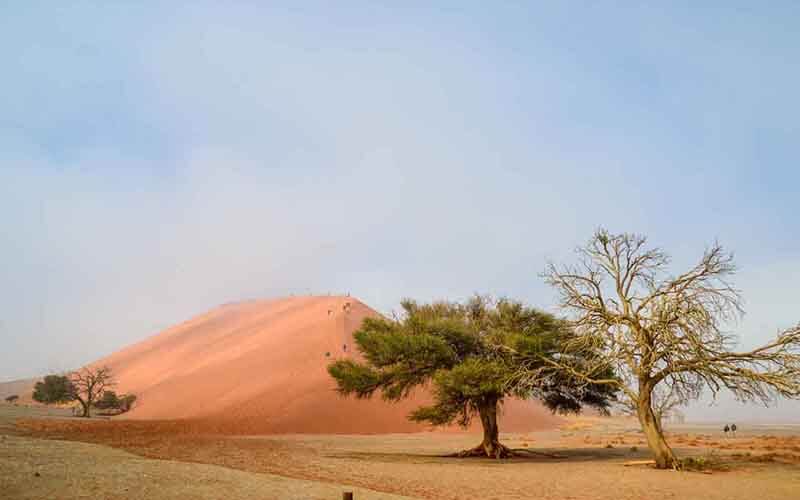 The 2×4 parking is 5 km from Deadvlei and a good place to park should you have a 2×4 or perhaps not so confident in the deep sand. NWR have a shuttle that goes up and down taking you to the parking at Deadvlei or Sossusvlei. Maybe walk in the last 5 km and catch the shuttle out.

The Sesriem canyon is 6 km from the camp and is a great little excursion. The water that flows down the Tsauchab River finds its source in the Naukluft mountains. This catchment area gets rains most years however sometimes a decade can go past without the river flowing. The 5km length of the canyon is caused by sedimentary rock that has been eroded away and creates a canyon 5km long, around 32m deep and on average 6m wide. The name Sesriem means 6 x lengths of a cow hide. This is the length it took to get a bucket of water out of the bottom. When you walk in turn left and walk to the end (200m) there is a small waterhole there and you would often see baboons and birds drinking there. 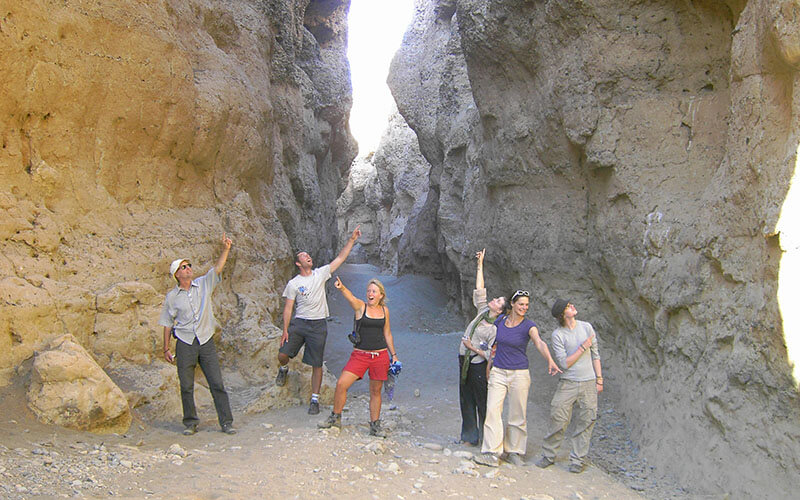 Take lots of water (1l/hour) when climbing big daddy or walking in from the 2×4 parking. Some fruit for energy, sunblock and a hat. In winter the mornings are cold in the desert but as the day warms up it is best to have layers on so you can take off as it gets hotter. In summer wear closed shoes as the sand can get very hot.

There is a fuel station at Sesriem and just outside the gate to get fuel, but it is always better to fill up at Solitaire just in case it has not been delivered and the have run out. There is also a tyre repair at Solitaire and Sesriem.

The water in the campsite taps is fine to drink however it tastes a bit like chalk. It is borehole water and runs in underground limestone caverns.

There are plugs to recharge your devices in most camp sites and a braai area. The reception and bar sell vouchers for Wi-fi and you can by daily baked bread from the shop.

There are male and female bathroom facilities that are usually clean except when there is a sandstorm.

There is a swimming pool that is surprisingly cool even in summer and the camel thorn trees give good shade.

2 nights 3 days is a good period to see everything but most importantly take your time and enjoy this experience. Contact us to book Sossuvlei Safari Tours.